The pandemic of 2019 has caused countless people to be working from home. Indeed, the expression WFH has entered this mainstream this year. For many companies based in New York City, having people WFH may mean lower unincorporated business tax.

In some cases, WFH has produced tax savings in the seven figures, for companies that utilize Topia Compass for tracking and proving where work actually takes place. Let’s explore how.

What is Unincorporated Business Tax or UBT?

NYC-based companies that are not C or S corporations often do business as partnerships, LLCs, or sole proprietorships. If so, they owe the UBT, which is 4% of income allocated to New York City. A company with taxable income of $1 million, for example, would owe $40,000 to the city, on top of their other tax obligations. For an unincorporated business with a multi-million-dollar income, the UBT obligation can be immense.

The key to the above paragraph is that UBT applies to income allocated to NYC. (Note that UBT is imposed by NYC, rather than New York state, so its reach is not statewide.)

For example, suppose Sarah Smith lives in suburban Westchester county but her company’s office is in NYC. Say Sarah continued to commute in the first quarter of 2020 but has been working from home ever since.

With 75% of her work days outside of NYC, only 25% of Sarah’s portion of earned income for the business in 2020 would be allocable to NYC and thus subject to UBT.

Or, suppose Tim Thomas lives in a Manhattan condo, near his company’s office. Midway through 2020, Tim and his family moved to their second home on Long Island, beyond the city limits.

Tim has a home office there, where he has done all of his work during the second half of 2020. With a 50-50 split for the year, between work inside and outside of NYC, Tim or his business would owe UBT on only 50% of his earnings.

How do I calculate UBT?

Reducing UBT in the manner described above is not always simple. Companies subject to UBT may have multiple employees, most of whom have spent some work days in the city and some work days elsewhere. Determining the correct percentage of NYC time can be time consuming and difficult.

That’s where Topia can help. Topia Compass, our distributed workforce and business travel compliance solution can identify the remote work location for every employee, for every work day, so that the percentage done in NYC can be accurately determined, documented, and substantiated – important in case of audit.

To illustrate, suppose a hypothetical ABC Hedge Fund reports $10 million of taxable income this year. NYC-based ABC Hedge Fund is structured as a partnership, so the UBT bill would be $400,000, at 4%.

Drilling down, say ABC has two partners and four analysts. The partners each spent 60 days working in NYC, out of a possible 260 days (52 weeks times 5 days per week.) That’s 23% in NYC.

The Burden of Proof is on the Taxpayer

Claiming a lower UBT obligation is one thing; having that claim hold up under a possible audit of an income tax return is another. For sustainability, one key is being able to document where each employee was working, on every day of the year. With Topia Compass audit ready records can be produced at the click of a button.

If showing where work was done is the first step, having the calculation pass scrutiny must come next. Fortunately, the law will be on your side, if your UBT calculation is questioned.

NYC’s UBT is considered a state and local tax (SALT), because it is assessed by a local government. NYC Finance Letter Ruling #18-4964, published in August 2018, held that New York SALT burdens can be split, based on the amount of time spent in NYC. The location where income generating employees perform their services, day by day, can determine the proportionate amount of tax owed.

With Topia’s leading tech platform to help prove employees’ year-long whereabouts, UBT can become far less taxing than it has been in the past. Even post-pandemic, remote working is likely to remain a growing trend, cementing your opportunity to shrink UBT obligation.

Don’t just take our word, hear from the experts at Hodgeson Russ in this recent webinar. To learn more about Topia Compass for NYC UBT, click here.

Note: This content supports Topia’s marketing efforts and is not written tax advice directed at the particular facts and circumstances of any person. The information contained herein is general in nature and is based on authorities that are subject to change. It is not, and should not be construed as, accounting, legal or tax advice provided by Topia to the reader.

Do you need employee location tracking? Compliance considerations for your newly distributed workforce.

Moving to Estonia: A new set of experiences

I recently moved from San Francisco to Tallinn, Estonia to take up a new role… 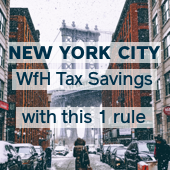